DTM Music Nights Are Back 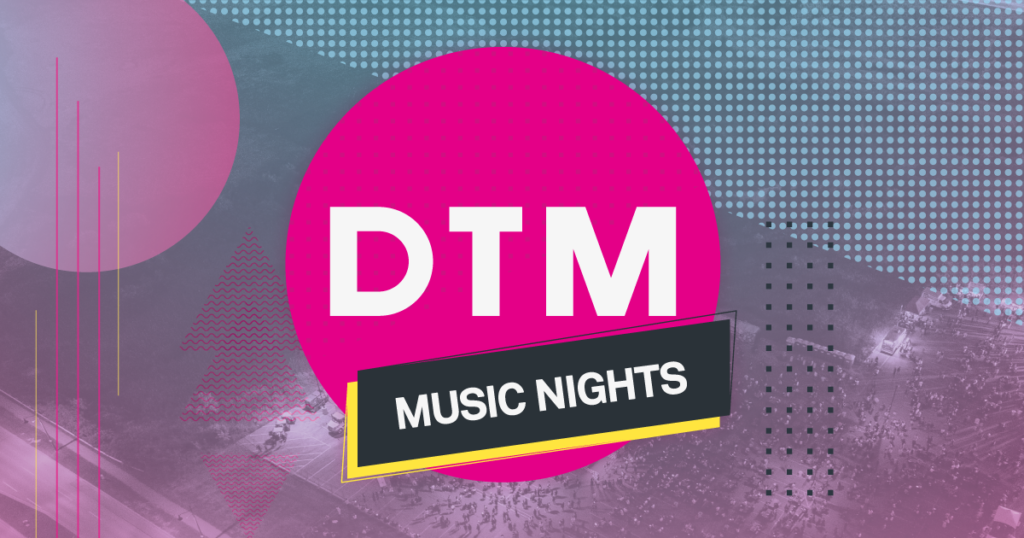 DTM Music Nights mark the return of live music to the stage at Origin Square. Join us on Saturday nights in September at 169 Enterprise Boulevard for a series of performance by local talent from across the Greater Toronto Area.

Funeral director by day, songwriter by night, Sagen Pearse’s life lessons, stories from past lives, and alternate dimensions penetrate each song he writes. Sagen’s unique perspective on life, love, and death create songs that really make you think of your own morality and mortality. Hollowsage along with his band The Three Mile Islanders, composed of long-time friends Kevin Ker, Justin Dillon, Matt Gunn, and Joshua Veens, manages to build huge crescendos and beautiful melodies while still directing attention towards the lyrics that carry the songs. Hollowsage & the Three Mile Islanders recently won Album of the Year for their debut 2020 release of “Nuclear Home” and Emerging Artist of the Year at this year’s OMAs.

Junestone first began playing outrageously funky and soulful songs in the summer of 2018. Since selling out their first ticketed event in February 2019, the four friends have released 11 music videos and performed at many events including T.U. Jazz Fest, Wintersong Music Festival, and Summer Tide at the Royal Botanical Gardens. Starring Justin McHugh on drums, Borys Franiczek on guitar, Ian Aisling on piano, and Olivia Brown on bass and lead vocals, Junestone continues to captivate audiences across the country with memorable original music, undeniable vibes, and their refreshing take on jazz fusion.

Aurora, Ontario, natives Shannon & Brendan Beresford have a way of capturing audiences wherever they play. Whether it’s their undeniable sibling-duo chemistry, the fusion of Shannon’s powerhouse vocals with Brendan’s rich harmonies and masterful guitar solos, or their Country-Rock sound, they are solidifying their place in the Canadian Country Music scene. They are unapologetically themselves, writing from the heart and composing music that draws fans in from all ages. With new music set to release in 2022, The Beresfords are ready to return to the stage and take the Country Music world by force.

Philadelphia’s Jerome Tucker is a lead vocalist and bassist who joined the US Navy, ending-up in the Gulf Coast and moonlighting for various Blues and Cajun artists. Following the Navy, he co-wrote songs with Ivan Neville, moved to Chicago and performed with the city’s greats. Today, Tucker calls Toronto home, playing with his own band: Carl Harvey (guitar), Unionville’s Rob Christian (sax, flute & keys), Kingsley Etienne (B3), Neil Brathwaite (sax) and Rich Greenspoon (drums). The result is a polished explosion of funky soulful blues that’s made them a true favourite on the local scene.

Big Shiny ’90s was formed in 2015 from a shared passion for the music of the era. They are a group of veteran musicians from across the GTA, who strive to perform the songs with the same energy and spirit as the musicians who wrote them. The band has a current song list of approximately 150 songs, spanning a huge variety of artists and genres. Over the past few years, they have played countless shows at bars, clubs, festivals, weddings, corporate events and private functions all over Southern Ontario. They specialize in custom-tailoring their set-lists to suit all audiences and venues. Expect nothing less than a high-energy, fun-filled and dynamic performance from the band at each and every event.

Triple play is a high energy, four-member band that has been performing for more than 20 years. Formed by lead guitarist and Unionville resident, Raymond Lee, Triple Play is well known in the Caribbean communities, having performed at Caribana, The Markham Village Music Festival, several charitable organization events and a support slot for Millie Jackson at the Sony Centre for the Performing Arts in Toronto. The band – composed of drummer Andy Foster, keyboardist Linweal Ollivierre and lead vocalist Lance Charlemagne – plays a variety of music with emphasis on Reggae, Soca, Latin and Rhythm & Blues.

Bernadette’s style is truly authentic and pays no attention to what conformities the industry demands. She had developed a dynamic and expressive vocal range, earnest and emotional lyrics, and playful interpretation of song-craft. Her full-length album “Monarch” was produced by Canada’s own John-Angus MacDonald (guitarist for The Trews) and recorded during the pandemic. It touches on the magic of small-town Ontario and highlights the importance of one’s local community. Her new music has a unique, yet classic sound that’s been missing in this country and can truly be described as Canadiana. Featuring some of Canada’s top musicians and a voice that sounds just as good on stage as it does on the recording, Bernadette takes listeners on an intimate and exciting journey that resonates with audiences of all ages.

Born and raised in Cambridge, ON, Conor Gains grew up in a musical household. After taking lessons in violin and piano as a child, he developed an appreciation for the guitar; observing a wide range of artists, from Bob Dylan and George Harrison to Jimi Hendrix and the Allman Brothers, all of which helped shape his early writing and musicianship. The 27-year-old singer-songwriter, instrumentalist, and producer makes music that evolves freely because it’s been crafted outside of the box — effortlessly synthesizing the unmistakable warmth of Classic Soul and Modern R&B, with the soaring melodies of Psychedelic Southern Rock and Pop and bound together with the precision of an artist with an ear for Jazz. It’s both timeless and distinctly of the times; the product of a skilled artist whose deeply soulful and unyielding voice anchors a medley of sounds; the result of a musician with an earnest curiosity in the world, and whose lyrics reveal a salt-of-the-earth honesty.

DTM Music Nights Are Back
Skip to toolbar