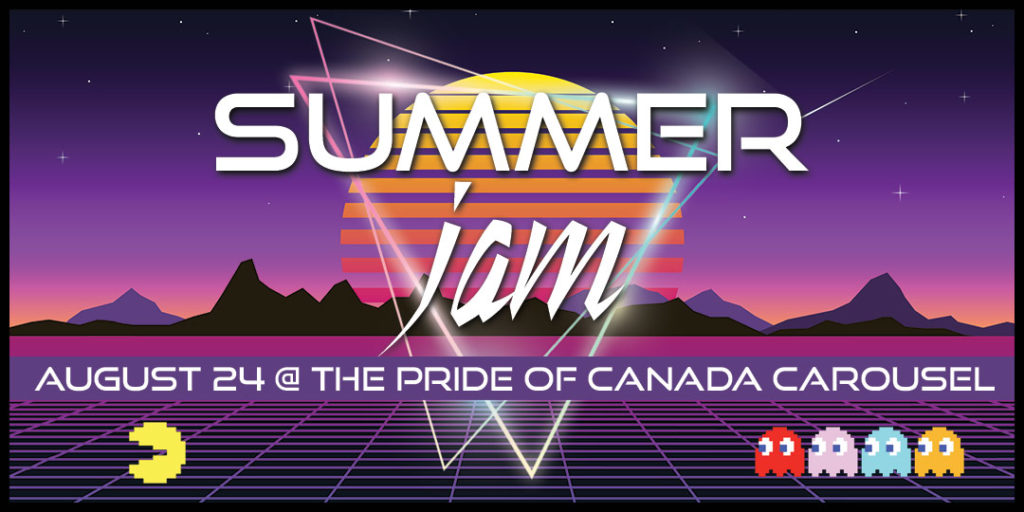 It’s time to get your retro on, Markham.

The highlight of the 2019 Downtown Markham Music Festival is Summer Jam, a 19+ event taking place Saturday, August 24 at the Pride of Canada Carousel, featuring live music, food vendors, a bar serving various alcoholic beverages and a variety of video games straight from the 1980s.

“Summer Jam is the keystone event for the summer at Downtown Markham,” says Christina Butterfield, who oversees communications in the development. “It’s an opportunity to dance and party at the carousel without any kids around. We love to see the community come out, experience some of our great restaurants and really enjoy themselves.”

Admission to the event is free, and isn’t limited just to residents of the Downtown Markham community. Food and beverages can be purchased from vendors at the event. Doors open at 8:30pm, and there will be an after-party at Milestones kicking off at 11:30pm.

Music will be provided by Bangerz Brass, a fun-loving hip-hop and trap brass band known as one of Toronto’s favourite party bands, and DJ M4RS, a creative, high-energy DJ with a growing fan base in Toronto and internationally as a member of LGS Band.

The Bangerz highlighted last year’s Summer Jam, and were asked to return because of their fun energy, interactivity with the crowd and lively performances. Bangerz Brass’s unique and powerful brand of hip hop with horns is intoxicating and exhilarative – a perfect fit for DTM’s Summer Jam. The band is fresh off the release of their first full-length album.

But what promises to make this year’s Summer Jam a totally different experience is the games: Dance Dance Revolution, Arcade basketball and classic Atari games like Pac Man, Centipede and Asteroids. Attendees can show off their skills at these classic games and compete for high scores and prizes.

Food at this year’s Summer Jam is generously provided by restaurants in the Downtown Markham community: Lanna Thai, Good Catch Boil House, Poke Guys and Terre Rouge. Beverages will be served by staff from Good Catch, featuring two lines of craft beer and classic cocktails for just $5 each. Anyone attending the after-party at Milestones will get a free appetizer with the purchase of an entrée.

The Pride of Canada Carousel is located at 8080 Birchmount Road in Downtown Markham. Guests to the party should remember to bring photo ID as it is restricted to those 19 years of age and over.

About Bangerz Brass: Bangerz Brass are Toronto’s Hip-Hop and Trap brass band, and they’re here to change the game. Bringing together 3 of Toronto’s hottest young MCs and a hurricane-force brass section, they’re about to drop their self-titled first album, a thundering mashup of moods that leaves you gasping for air after a roller coaster 30 minutes. Their bi-monthly sellout shows – filled with dance-offs, MC battles, sing-alongs and even mosh pits – have made them the city’s favourite party band. Montreal’s The Link newspaper describes the live experience: “An explosive and delirious show would be an understatement. The party … was pure distilled fun.” In just two years, the band has become so synonymous with live music in Toronto that they are featured on the cover of the city’s 2019 tourism magazine.

About DJ M4RS: Marius aka M4RS has been taking over the DJ scene one audience at a time. His passion for music initially manifested itself through dance, specifically bboying (breakdancing), eventually being recruited by one of Canada’s most infamous crews, Bag of Trix. Hehas become a household name for dance battles, providing tracks for the biggest festivals in Canada (Red Bull, Freestyle Session, Graffiti Festival, etc). His experience ranges from underground clubs to corporate events, never missing a beat and always emerging as a crowd favourite no matter who else is performing. DJ M4RS’ distinctive skillset makes him a valuable entertainer, and in 2014 he became the official DJ and dancer for LGS Band. Together, they perform all over Canada, France and U.S.

Shout out to the vendors who transformed the space

Throwback to summer days and nights in DTM. Counti

Throwback to summer days and nights in DTM. Each d

Recalling the treasured memories of the monarch wi

Explore the great outdoors and hit the trails at R

Get hooked on fresh seafood in DTM. Try some of th

Bring family and friends together, and celebrate a

Say goodbye to summer with some live music! The DT

It’s that time of year again. Shop Back to schoo

Happy National Dog Day! Thank you for sharing your

Golden hour of the magical light radiating in DTM.