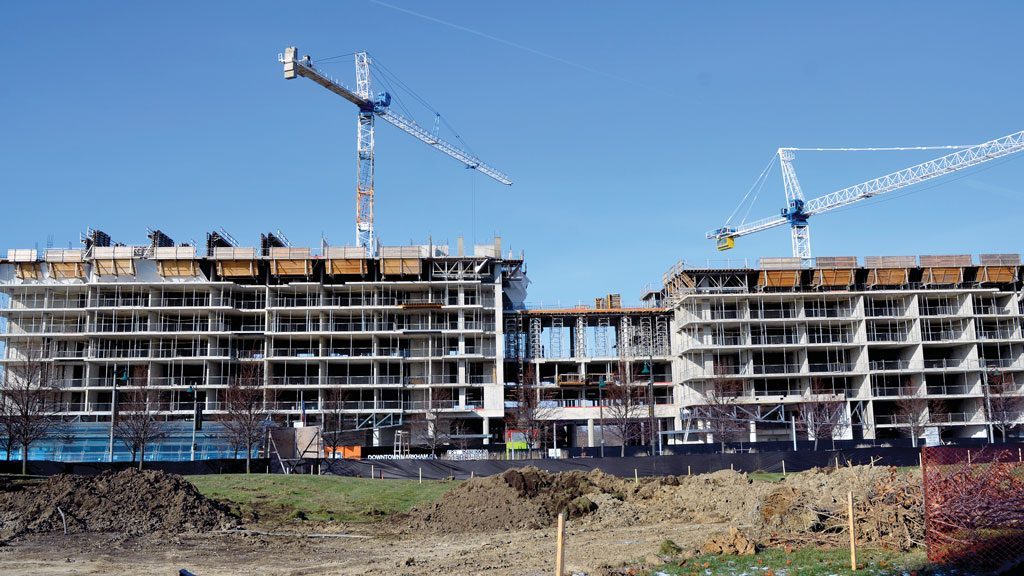 Construction on the York Condos in Downtown Markham is well underway, but there were some unique challenges in its design.

“This is very much a gateway building,” Sheldon Levitt, a principal at Quadrangle, the architect on the project, told Daily Commercial News in a recent article. “Enterprise Boulevard and Warden Avenue is the western gateway into Downtown Markham so we really wanted to have a signature work of architecture there.

“All of the buildings are based on creating this lively, urban, pedestrian-focused environment. What we were pleased about accomplishing at York Condos is even with all the site challenges, we were able to work with those principles.”

The building, which is mostly residential with 545 units and a small 3,000-square-foot retail component, is expected to completed in 2019.
Some of the challenges for the site, include its large, rectangular shape but also access.

“The first challenge is the only vehicular access into the site is from a short frontage on Upper Duke (Crescent). You can’t access it from Warden, you can’t access from the park and Enterprise Boulevard is actually separated from the property by the Viva transitway.”

The high water table in the area also created some challenges.

“It’s almost in a courtyard because the three buildings rise above that roof level but there is a large separation between the buildings onto the park so that courtyard also has views to the park to the north in the Rouge Valley,” said Levitt.

Indoor amenity space connects the two larger buildings on Enterprise Boulevard and because there are a variety of units in the building, there are also a variety of amenity experiences, said Levitt.

“There are some other amenity spaces located creatively around the building,” said Levitt.

“In particular, we have a really nice cafe lounge that is right on the street at the corner of Enterprise and Warden, at that main intersection, right by the bus shelter.”

The design team wanted to give the building an urban feel.

“The design of the building was almost to appear like a vertical village, so there is a lot of variation in the facade,” Levitt noted. “Even though there are repetitive elements, they are very mixed up to create this dynamic look to the building.”

He added, “The good thing about the building is that it’s got very active street frontage pretty much around the whole perimeter of the block. We wanted the experience of walking around the building to be animated and active.”