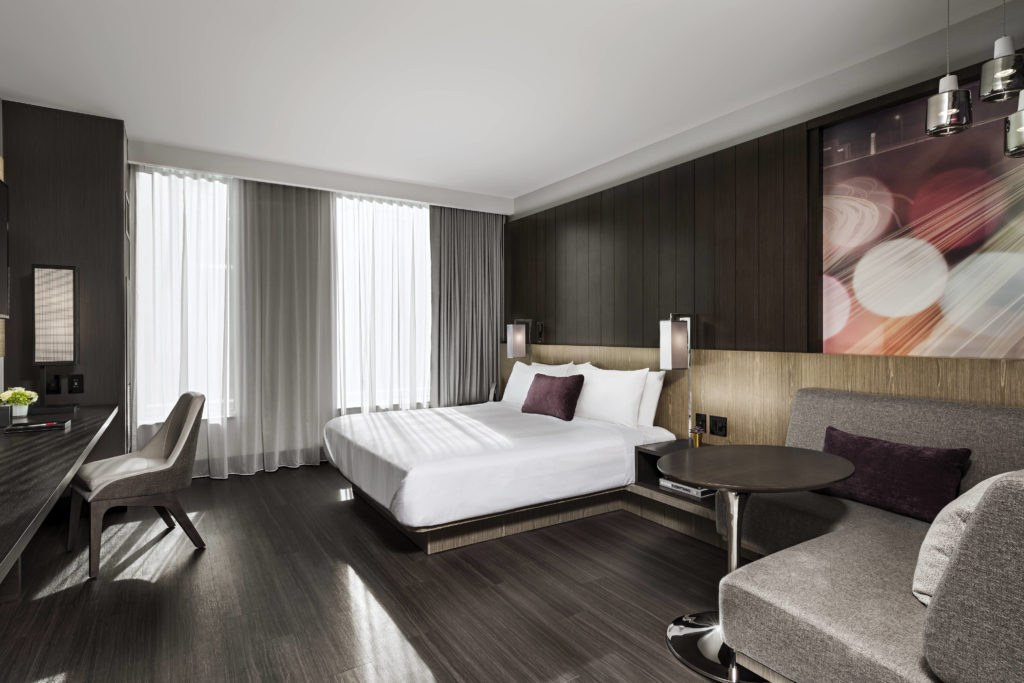 The Toronto Marriott Markham captured a prestigious interior design award at the ARIDO Awards Gala in downtown Toronto on October 24.

The suites, designed by Quadrangle Architects, were unveiled in May 2018 as part of Toronto Marriott Markham’s grand opening. The new hotel is a vital part of Downtown Markham’s vibrant, culturally infused, mixed-use development focused on world-class design, modern amenities and environmentally-responsible, sustainable growth.

According to Quadrangle principal Sheldon Levitt, the suites were designed with locally inspired accents, open closets and technology-inspired work surfaces.

“We settled on a Millennial focus for the guest suites, whose preferences include having everything in sight and plenty of plugs for mobile devices,” Levitt told Award Magazine. “Instead of carpets, we selected wood floors for a clean look and ease of maintenance. The walls are paneled, and we created many usable ledges and surfaces. Altogether, this amounts to an open, sharp appearance.”

For The Remington Group, it is yet another feather in the company’s award-winning cap. The growing Downtown Markham community has been recognized for a number of awards, including Gold as the best new development at the 2016 Canadian Shopping Centre Awards and Best New Community Built at the 2017 BILD Awards.

The ARIDO award fits right in line with the forward-thinking, modern focus of the Downtown Markham development. The community features a variety of modern architectural elements and a multitude of avant-garde retail spaces, a contemporary art collection, which includes the Pride of Canada Carousel, featuring Canadian-themed sculptures made from reclaimed objects.

In September, Downtown Markham unveiled the new home of the Yamaha Music School, a state-of-the-art facility offering individual and group music lessons for children and adults.

If you would like to move your business or office

This week is Canada History Week, an initiative to

🎉 #GIVEAWAY! 🎉 We’ve teamed up with Yamaha

How sophisticated is the Derma V+ Cosmetic Clinic?

Swipe to see a pic of the full painting in display

Viktor Mitic was born in Belgrade, Serbia. He was

Experience the magic of the Pride of Canada Carous