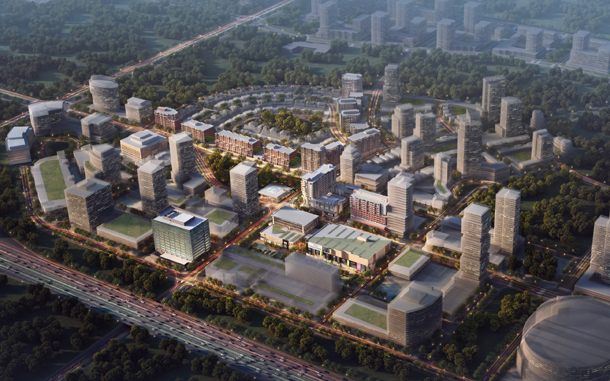 From the rooftop of Nexus South on Enterprise Blvd, Quadrangle architect Sheldon Levitt illustrates what’s been done, what’s just beginning and, most importantly, what the vast empty areas now dominating this 100-hectare piece of property will look like when Downtown Markham is ultimately complete.

The little girl, unsteady on 18-month-old legs, wobbles around the splash pad of the newly created park. Although there is no water to kick around today, the sheer joy of motion causes her to shriek out to her mother. The joyful sound causes architect Sheldon Levitt to shift his gaze from the tops of the residential buildings to the toddler.

“We used to talk about you in the meeting rooms, and there you are,” says the usually soft-spoken architect, raising his voice. “We did this for you!”

It’s true: In about two or three years, when those little legs are strong enough, there’ll be a carousel with crazy characters to straddle at the main intersection of this very new, and very urban, development in the heart of Markham, plus oodles more green space in which to run around. There’ll also be a movie theatre, cafés, restaurants, offices, and, it’s hoped, a whole lot of adults walking around.

And all of this in what used to be car-dependent suburbia.

Fifteen minutes before welcoming the girl to “Downtown Markham,” Mr. Levitt had taken me to the rooftop of a newly minted mid-rise condominium a short distance away on Enterprise Boulevard. From this vantage point and with a single sweep of his arm, he was able to illustrate what’s been done, what’s just beginning, and, most importantly, help me visualize what the vast empty areas now dominating this 100-hectare piece of property will look like when all of those plans on Quadrangle Architects’ computers become reality.

Stretching almost to Warden Avenue to the west, there’s already a lot to see: dozens and dozens of occupied townhouses and a linear park with a dedicated transit corridor fill our eyes. To the east, however, it’s a whole lot of rutted mud and scrubby grass stretching all the way to the GO tracks near Kennedy Road; in the coming years, however, Mr. Levitt assures me there’ll be even more townhouses, mid-rise buildings and, once the Buttonville Airport height restrictions disappear (it’s closing and being redeveloped by Cadillac Fairview), a few tall point towers … all ready to be filled with people. And with “connectivity” as the overarching philosophy behind it all, those people will rediscover the joys of a walkable community

“It really is an unbelievable thing to have been involved in this from the very beginning, and then to see all of this activity and all of the different people coming in,” he gushes.

“This is really the opportunity of a lifetime.”

But the opportunity to create New Urbanism on a grand scale wasn’t always the case, says Mr. Levitt. When Remington Group assembled this parcel of land north of Highway 407 in the early 1990s, the thinking was to build yet another bedroom community like those around it. But, with the urging of then-mayor Don Cousens and some seriously open minds belonging to Remington’s Bratty family, plans soon changed, and principles of the New Urbanism movement – as espoused by “poster boy” Andrés Duany of Miami, then doing planning work for the City of Markham – were put into place.

So, even as the parcel of land sat undeveloped well into the 21st century, elements such as “the primacy of the pedestrian,” scale, massing and “the way that the buildings related to each other rather than being in isolated pockets” were never abandoned, and newer ideas, such as LEED-certified buildings, were added to the mix.

“I give a lot of credit to my client,” says Mr. Levitt simply. “It takes a lot to do something like this because they’re building in an open field. They’re getting into expensive shoring; all the things you have to deal with in a downtown site, they’re doing out here where they owned all the land and could’ve done whatever they wanted.”

In 2006, Quadrangle arrived on the scene when it successfully bid on a job for a block-long stretch of mid-rise residential buildings. Back then, however, images of what Remington proposed had more in common with Ye Olde England than with the high-tech hub Markham is today. However, as Quadrangle’s role increased – today, it is both architect and master planner of the community – the designs of residential, retail and office buildings alike all became modern (albeit with a small “m”).

On this warm autumn day in 2014, only the townhouses Quadrangle didn’t design – the ones the little girl was playing near – are faux Georgian. The Marriott hotel now climbing at the northeast corner of Enterprise and Birchmount Road will be all projecting boxes, fins and balconies like any slick downtown condo (it will incorporate condo units as well), and, a little to the south, insurance company Aviva’s new, tight-to-the-sidewalk headquarters will look good enough for Queen and Bay. “I think these guys are going to be absolutely thrilled to be away from the Mandarin [below their old office at Birchmount and Eglinton] and be able to, at lunch time, walk out the door of their office and be able to go to 20 different places,” chuckles Mr. Levitt.

And that’s the thing. Building a community on this scale, one needs anchor tenants, just like the shopping malls of the 1960s, except back then, it was a department store and a supermarket, and today it’s an office building, a hotel and a cinema. Get those on board, however, and smaller restaurants and cafés will add the necessary life to the places in between.

And lively these streets will be. The solar-powered, “junk art” carousel designed by Quebec artist Patrick Amiot will add colour and whimsy. The hotel will add sophistication. The Pan Am facility and proximity to the Rouge River valley will be a boon for fitness buffs. The condo buildings, with their garage doors hidden from the street, will be fully urban in character, and the overall connectivity to transit will make life easier for everyone.

And, if it all works as well as I think it might, the only thing the little girl will notice is how happy her neighbours are.

Toronto suburb puts the emphasis on urban
Skip to toolbar